On December 4th, we had both a drive-through Christmas Festival for our members’ children and Lighted Boat Parade!

Here are few pictures of our lighted boats and the Children’s Festival. 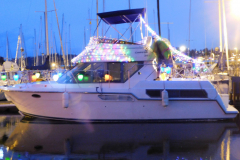 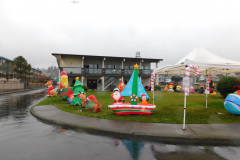 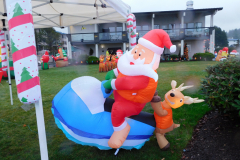 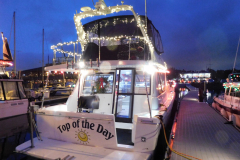 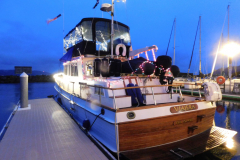 This event started as a children’s party for members’ children and their guests. Covid caused a lot of changes in communities and in their usual resilient way, Vagabonders of DMYC, adapted to the need to celebrate safely. A team got to work and created a delightful array of lights and inflatable Christmas decorations for the children to enjoy. They even brought in an ice cream vendor so all could enjoy a tasty treat outdoors. Great fun was had by all.

The Des Moines Lighted Boat Parade is an annual event organized and hosted by the Des Moines Yacht Club (DMYC) for all boaters in the area.  It’s been an annual event for over 20 years, and is enjoyed by both the boaters who like to decorate their boats and the spectators along the shoreline. The parade route started at the Des Moines pier, northward to Three Tree Point, then southward to Redondo then back to the pier.

Des Moines has an active boating community and a great marina supporting recreational boating from all over Puget Sound. There are four great recreational boating organizations located here, and all had boats in the parade.
Des Moines Yacht Club (DMYC) – Host of the Lighted Boat Parade. DMYC was founded in 1957 and has about 300 members. Their facility is at the south end of the Des Moines Marina. They are known for their annual Marine Swap Meet, South Sound Opening Day of Boating ceremony, Waterland weekend parade, and the Holiday Lighted Boat Parade.
Three Tree Point Yacht Club – Founded in 1969. Their 80 plus members have their home port here in the Des Moines Marina. They sponsor and participate in a variety of annual sailboat races throughout the Puget Sound.
Americas Boating Club of Poverty Bay was founded in 1963. Their 40+ members also make their home port here in Des Moines. They offer a series of annual boat training courses and can provide vessel inspections upon request.
The Des Moines Marina Association – Founded in 1993 as a marina tenant group with a mission of “Working to preserve the health and welfare of the Des Moines Marina and promoting the value of the Marina to City residents.”

There were 19 boats participating from these organizations. Several came from Tacoma.  All these organizations are engaged in the PNW recreational boating activities.  They are also significant contributors to the larger Des Moines community, with annual community events and charitable donations.

Watch the Waterland Blog video to see the boats on parade.

This site uses Akismet to reduce spam. Learn how your comment data is processed.